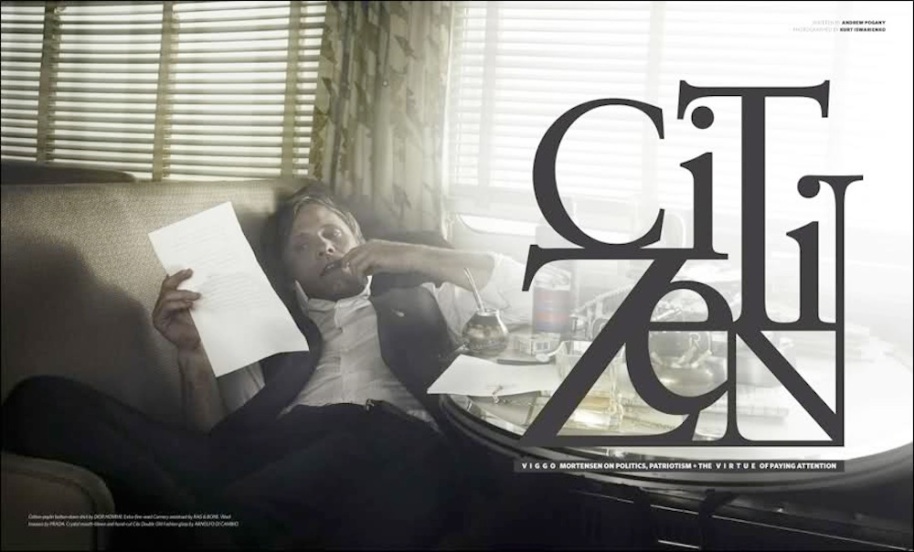 It’s been a long, dry, cloudless, hot, comfortless day. For the vast duration of it, Viggo Mortensen’s been sweating in a fancy three piece suit, playing for the photographer’s camera within the dining cabin of a vintage passenger car sitting on a small stretch of abandoned railroad tracks somewhere in the City of Industry. The shoot breaks intermittently; each time he walks outside to drag deeply from a Winston, return missed calls, or simply pace the abandoned rails outside.

Hours pass slowly; darkness falls fast. Viggo introduces himself to me quietly, tiredly, at the small bar in the back of the Pacific Dining Car, a legendary eatery found in 1921 in a railway car parked on a downtown Los Angeles lot. The kitchen’s known to cook up a highly respected prime rib, and once we sit, I make sure to tell him so. I humbly order a shrimp cocktail, a plate of steamed artichokes, and a serving of crab cakes. Viggo, speaking Spanish to the waiter, orders a beet salad.

Trains figure significantly in the triage of film projects starring Viggo. In the already released western Appaloosa, the widow Allison French, played by Rene Zellweger, enters town on a train, destined to steal the heart Ed Harris’ Virgil and, by doing so, compromise the rare and valuable friendship and business partnership he has with Viggo’s grizzled Everitt Hitch.

“What I think is true about a movie like Appaloosa, and most westerns from the classic western period, is that they’re about the end of something: the end of a frontier. Not just a geographic frontier, but personal freedom,” says Viggo. “Like the character that Ed Harris plays, he cant just do whatever he wants by the end of the story anymore. When you enter, like he does, really for the first time, into a relationship with a woman, it gives you some boundaries that you need to respect. When you’re pulled into society, there’s a propriety that comes into play.”

There is neither justness nor society in the post-apocalyptic world of The Road, based on the Pulitzer Prize winning book by Cormac McCarthy. Here, Viggo, plays a father walking with his son across a landscape of ash and fire in search of safety and their next meal. The two are survivors of a recent cataclysmic event that’s rendered the earth all ash and fire. The railroad tracks they cross together are conspicuously absent a working train. Their only hope lies with each other, and what each one lacks in hope the other makes up with fear. It takes an especially measured actor to embody that state of constant mental and physical duress. “Emotionally, each scene was a kind of test to deal with intense regret, self-doubt, fear, paranoia, all those things. Its an interesting place to go.”

The examination of the small, everyday tests of individual integrity are at the core of Good, in which Viggo plays John Halder, a talented professor of literature living in Berlin during the rise of Nazism. Halder takes refuge from his neurotic wife and senile mother with his best friend Maurice, a Jewish psychiatrist and World War I veteran. Their friendship becomes increasingly strained after Halder accepts a seemingly harmless request to write what amounts to propaganda for the Party. Unexpectedly, he rises in the ranks, and as the country boils with over with national pride, Halder is happy to rationalize his involvement, until one day he boards a train to the nearest Jewish ghetto, and sees, for the first time, the horror he’s inadvertently participated in. The film, directed by Vicente Amorim, is, among other things, a steadied examination of the power of ideology, the nature of complicity, and the way in which politics can corrupt, even destroy, the personal.

You must find it rather providential that a movie like Good gets released during a time of economic upheaval after the big bail out, perhaps the most nationalist move ever made by the federal government.

It is true that while we were making that movie, I did often think that it didn’t feel like we were doing a period piece. I mean, it was specifically from that time, but I felt it was very contemporary, because it wasn’t that hard to understand. This is a movie made about people in the moment…

Having made and now watched Good, I watch it and think, “What would I have done at that time if I was that character John Halder?” And then I jump immediately to, “Well, what am I doing now?” That’s why that story has a resonance, it doesn’t feel like some period piece, with all those Germans that are “crazy.” Its us; its, “What are we doing?”

How is it US, or rather, what parallels do you see between the political climate of Good and ours presently?

Like when Bush junior first took office in 2001, people listened to the way he spoke and just said, “He’ll never last,” and “he’ll certainly never be reelected.” It’s the same thing they said about Hitler, like, look how buffoonish these people are marching around the streets, and his speeches are so over the top. It was like, “Come on, we Germans are intelligent people, he’ll never be reelected.” Well, they realized that there wouldn’t really be a proper election again. And he would change the judicial system, he would overhaul everything. And that’s what Bush has done. So, people who said in 2001, “It’ll never last,” well, in eight years he got done a 100 years worth of damage—financially, in terms of civil liberties, in terms of the environment, and on and on. And how does that happen? Its not just, “he’s evil.”  Its like saying, Oh the Germans are crazy. They’re submissive, they’re prone to getting lost and following any fascist, or Hitler is crazy and look at that exceptional situation. It’s not that exceptional.

Was John Halder an uncomfortable character to inhabit?

It’s an uncomfortable thing to watch, when you watch that character. I’ve had people come up to me and say, “I really didn’t like that character you were portraying,” and its like, well, I can’t help you there. It’s not about trying to be liked. It’s a portrayal of a person who does make wrong choices, and who should know better, and does know better, and after a certain point, even though he really should do something different, he doesn’t.

Were there times in your career when you’ve compromised certain values in ways that were harmful to you or to others?

I know that I compromise sometimes. There are very few actors who haven’t been faced with that, there’s very few that are immediately put in a good movie and choose good ones thereafter and are lucky as hell. It just doesn’t happen, you know. But that’s still a justification. The answer is, yeah, I’ve done jobs that I knew I shouldn’t have. But then you make the most of it. No, I wasn’t gassing people and creating them but I still made compromises. I guess John Halder would say he wasn’t gassing or cremating people either, but indirectly he was. We’re all responsible for what we do. How we behave as citizens does matter.

How, in your eyes, should a citizen behave?

People get defeated and they think, oh what can I do? The best thing you can do is the thing that takes the least work of anything I can think of in life, and that is, paying attention. That’s all it takes. Pay attention. If you wanted to put something on the poster that was simple, that was two words, it’d be: Pay attention.

Do you think people in this country even concern themselves with what it means to be a citizen?

Probably what’s been drummed into people’s heads the most is “I am a patriot and proud to be an American.” And then you say to people “What is an American?” What is it that you’re so proud of?” Tell me what it is. You’re just a human being…no different than Chinese, Japanese, Russian, or Mongolian or an Australian human being… Passports, borders, flags, while interesting, are bullshit. They don’t mean anything. Well, they do. But they don’t really identify you. And I think that the more that we try to break down walls, not just between different parts of town, and different races in our own country, but just between other people in the world, the better it is. The thing of building up the fence and our borders and all this stuff, it’s like, in the end it’s really a doomed-to-defeat effort, because by isolating yourself you don’t build the walls against other people, you’re really enclosing yourself; you’re creating a prison for yourself to be in.

What could this country do to further empower its citizenry?

I mean, the most important thing in life is your health right? You’re quality of life, physically, is always the most important thing. So for any government that is supposed to represent people within a specific geographic area, what’s the first and most important thing that it can do? It’s take care of the health of its people. And we don’t do that in this country. We don’t. I think a bad health care system is one of the things that keep citizens under the thumb of the ruling class and those who hold power in the United States. Anybody who’s worried about their health is not as focused as they should be as citizens. You’re not responsible to your community, to your neighbors, you don’t enjoy life, you don’t share life with others. You don’t have a sense of togetherness that’s profound and natural and easy because, underneath it all, we’re isolated by our terror, our fear of getting ill, and not being able to deal with it, and not being able to pay for it. It’s a very effective way of subjugating a population. I think that is one of the most destructive things in this country. I think it goes hand in hand with poverty, with social inequality, with racial inequality, poor infrastructure, all those things.

Do you enjoy living in the United States?

The things I’m saying, by implication, doesn’t mean I don’t like America. A lot of people hearing this, or if they read something that I said like this, would say, “Sure, he’s a traitor”. When I said in 2002, “We should not invade Iraq”, I didn’t want to go out and talk about it, I was provoked to do so, because people kept using Lord of the Rings as this horrible metaphor. I mean, respectable journalists, even in TIME magazine, said that Christopher Lee bore uncanny resemblance to Osama Bin Laden and roughly compared the fellowship of the ring to the United States allies and the dark army to the Islamic enemy. And I just thought, “How irresponsible.” How insane to say that.

Would you consider yourself a patriot?

Dissent is one of the highest forms of patriotism that there is. Dissent has to do with questioning what’s going on. There’s no such thing as a democracy in the end, just an effort to have a democracy. And part of that effort is to say, “Wait a minute, what we’re doing isn’t quite right.” And since this country is supposed to be for the people by the people, since it’s a government that is supposed to be participatory, then we have a right to say something, and anybody that doesn’t like it and says I need to leave the country and that I am not a true citizen of this country—that’s just nonsense.